This is a first of what I hope will become a series of blog posts inspired by Mike Ash’s let’s build series. I vividly remember that at first, not having a computer science degree, I strongly believed that NSArray is magical and folks over at Apple figured a way to bend O(n) when it comes to iterating over the elements and such. And while Foundation definitely packs more smarts when it comes to dealing with comon cases, it’s series like Mike Ash’s (and learning basics of computer science) helped me to see how anyone can build those.

In my series, instead of analyzing data structures and lower level functions I wanted to take a look at the apps that I find useful in my daily workflow. I want to learn how f.lux changes the screen colour, what keeps my computer awake with Caffeine or Amphetamine, how does AppZapper or AppCleaner knows which files to remove when I delete the app etc.

This series intended both as a reverse-engineering look at the internals and imagining how to architect given app. Hope you will enjoy it!

Sometimes you just want your computer not to sleep its screen to finish a long-running task, making sure it’s not interrupted. There’re several apps that do that: Caffeine and Amphetamine. Both are free, Caffeine is very simple and straight forward, while Amphetamine provides greater level of sophistication: do you want to prevent the entire computer from sleeping, or just keep the hard drives running? Do you want to prevent sleep when you get on a certain WiFi network or when certain app is launched, or maybe you want to allow computer to sleep if the battery level is low.

Let’s take both apart. Just like with any app, there are several ways to go about figuring out how it’s built: we can either google “disable sleep macOS” and make our way through the irrelevant resources or fire Hopper Disassembler and peak into the internals of the apps. 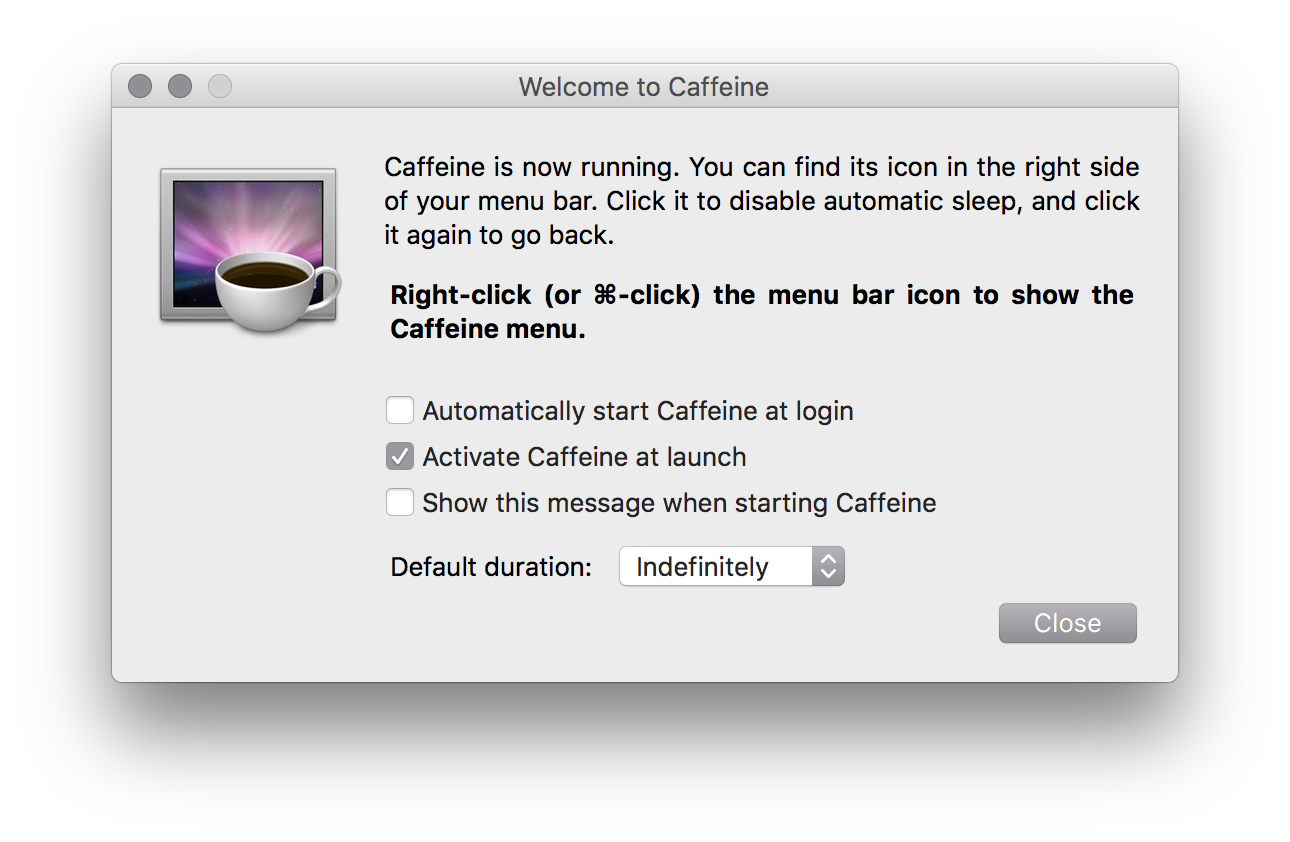 Let’s start with simpler (and a bit older) Caffeine. Few bels and whistles that it offers aside, the essence of the app is very simple.

If you feel like Nicolas Cage from National Treasure, here is a retired documentation. Note that the documentation mentions you can only call this method once every 30 seconds. So either I don’t understand the assembly, or author chose to ignore the warning. 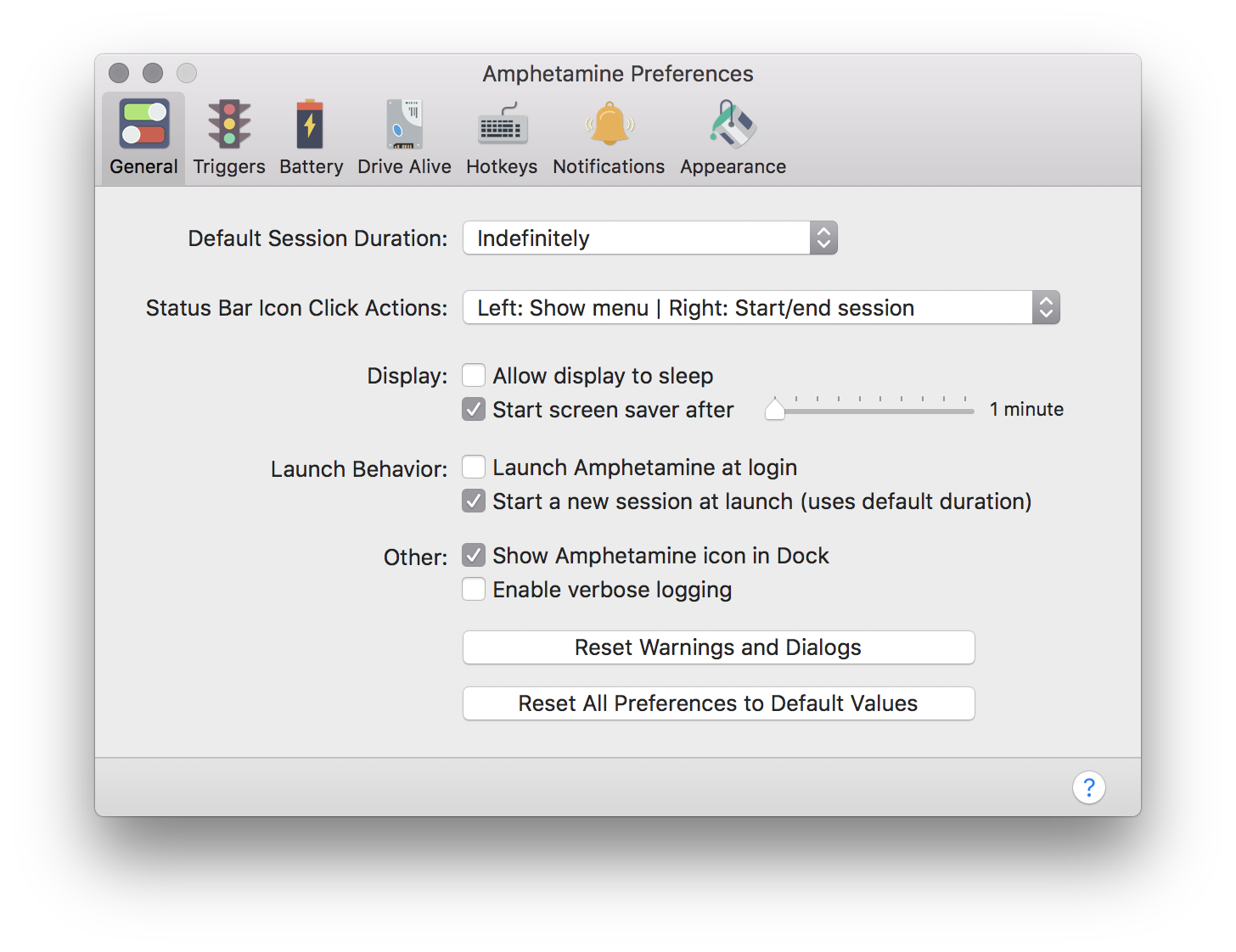 Just like the edgier name suggest, this is a more modern piece of software, and, as I mentioned previously, it has more to offer.  

Let’s start with the essence: disabling sleep. Amphetamine uses IOKit which offers variety of tools to interface with hardware and derivers from the comfort of the user-space. The function that we want to call is

Here is the Apple documentation on how to prevent display sleep 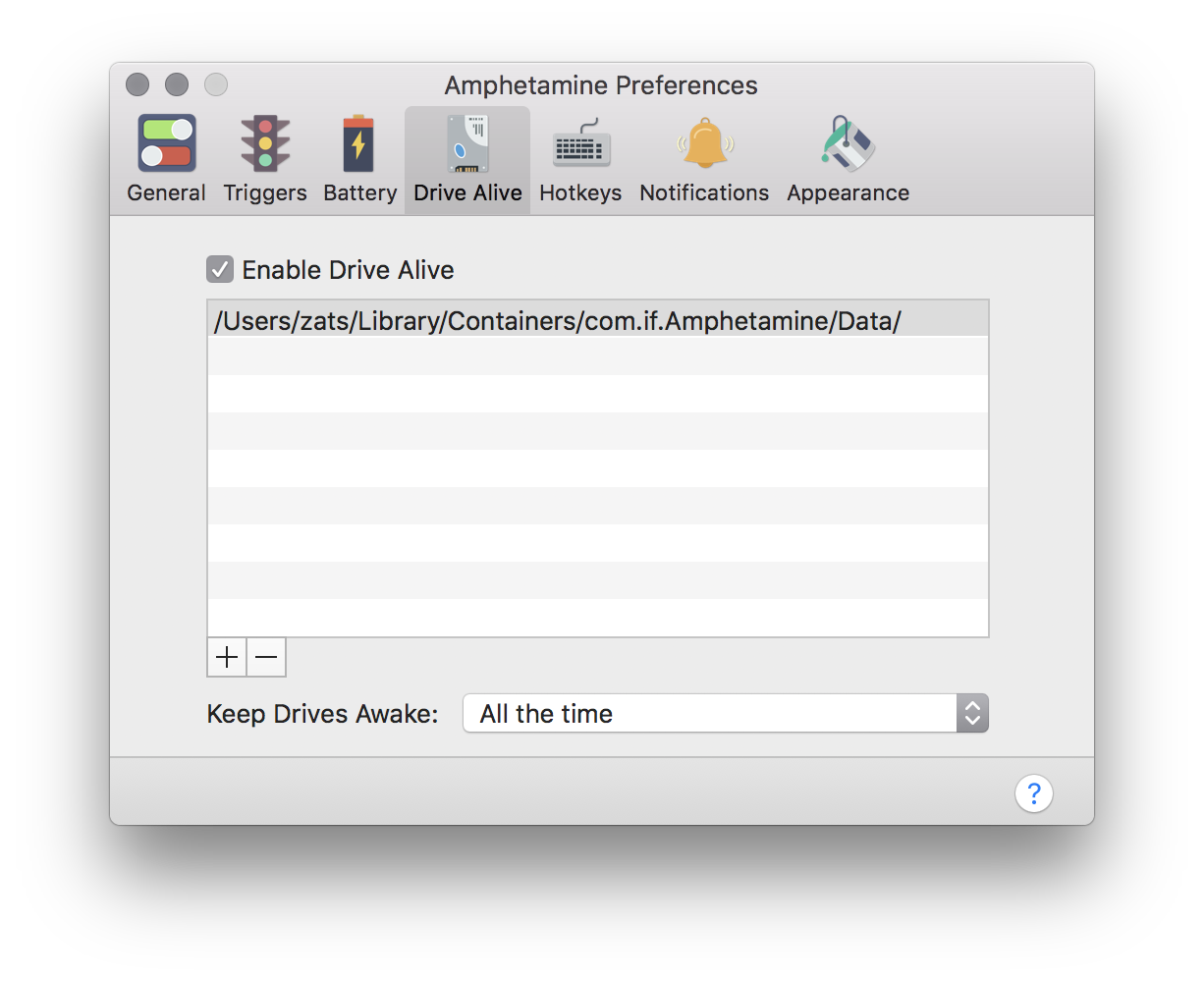 This part is actually fairly straight forward, there’s no API macOS offers to keep the hard drives awake, but it’s fairly trivial to do it yourself. As a matter of fact every time you perform any disk IO, the disk must be awake to allow you to read a file. In case of Amphetamine, it holds on to the list of the drives you want to keep awake. Once the timer fires, we perform following 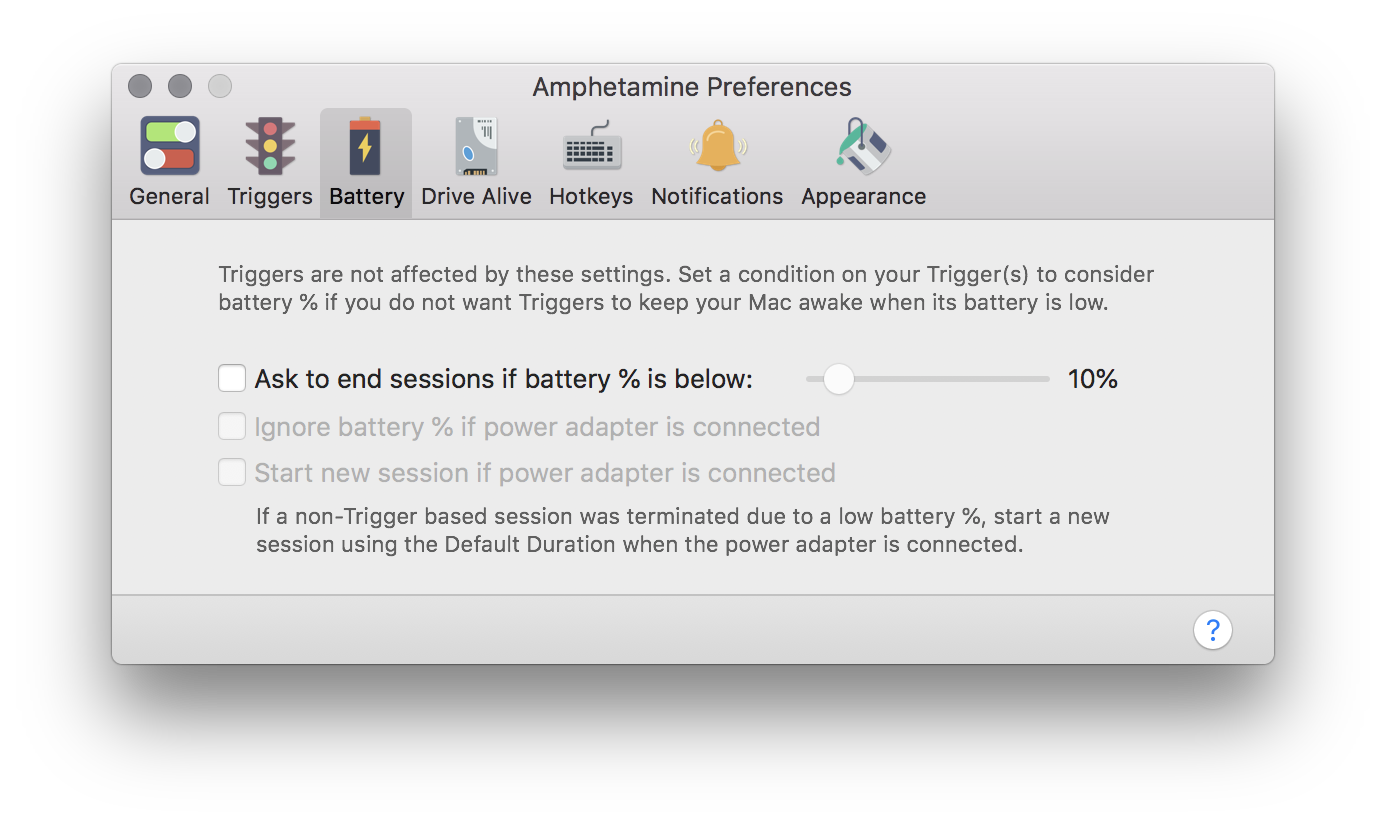 Amphetamine allows to prevent session if your battery level is getting low. This uses pretty much the same trick of sampling the battery level over certain time interval. Here is a sample of how to get it:

this will return an integer representing the battery level such as 88 or 12. Once we see that percentage went below certain number, we can pause the session. Option of ignoring battery level and restarting the session if you are plugged in is equality easy to implement by checking for power[kIOPSPowerSourceStateKey] == kIOPSACPowerValue 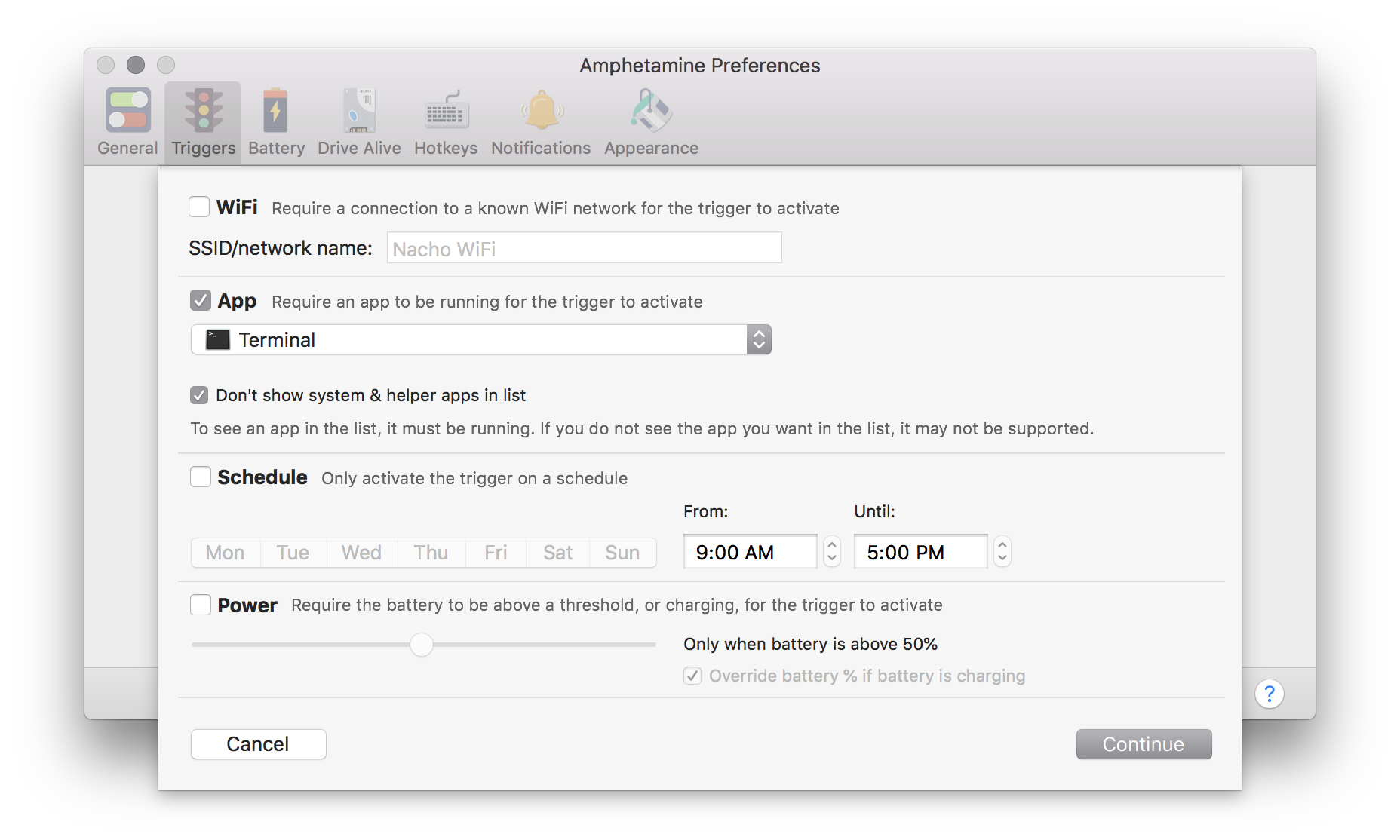   Amphetamine allows to automate session behavior using WiFi name or certain app being launched. Current Wifi name (also known as SSID) can be queried via CWWiFiClient.shared().interface()?.ssid(). To be notified about SSID being changed, you can use following code

Lastly to detect the apps being launched, there’s a notification we can listen to. The only tricky detail to note is that we don’t use shared notification center, instead we use the one that NSWorkspace points to:

We already looked at the power as a trigger in the previous section. As far as scheduling events, local notifications might be a good way to go allowing to schedule an invisible to the user notification that will ping your app but more importantly handle all the date math for you. You can refer to the documentation over at Local and Remote Notifications or User Notifications (depending which OS versions are you targeting)

When thinking about architecting this kind of software, I’d take in account that number of triggers might grow in the future (or you might want to provide some of them as payed upgrade). That makes me want to architect it as a system of plugins of 2 types:

Once both systems reconcile results, plugin manager passes the judgment whether to enable or disable no sleep mode. Plugin manager here acts as a plugin suite. I would create 1 manager per set of triggers:

Also having independant plugins will allow to test each one of them. Since we are dealing with a lot of hardware-related and time-dependant data, ideally every plugin should take a data provider that

Following is a rough implementation of various parts of the architecture outlined above. Keep in mind that I skipped certain sharp corners around Swift associatedtype since I didn’t want to pollute example with type erasures. I also use marker protocols extensively, this will allow to pull out common functionality later. Treat following code as more of a UML diagram.

Here we define 2 types of plugins I mentioned previously, when plugin manager is trying to figure out should we allow system to sleep or not, we don’t want any asynchronyous operations here, that’s why pubsub based plugins should cache their PluginEvaluationResult.

We will take a look at the concrete examples below

As mentioned before, we want to abstract plugins data access to reduce coupling and allow stubbing for tests. Implementation of those is not too important, but here are the examples of pubsub plugin data provider and eagirly evaluated one

Each concrete plugin should be instantiated with one, they can be shared if needed.

Plugin reacting to the app launch:

Fundamental differences between two plugins are:

This is the core of the plugin system. It should encapsulate a set of conditions. In restrospect I should’ve named it something like PluginsSuite since it encapsulates several plugins, meaning there should be another entity keeping track of all the PluginsSuites, but hopefully you get the gist.

This should give you a good sense of what are the building blocks API for the app that keeps your laptop awake and uses certain event types (quite common in the automation software) to trigger this behavior. As a rule I would try to stay away from polling with timers and always look for a framework providing relevant notification - this way you are opting into Apple’s ecosystem (along with bugs of course) and will get future improvements for free.

While Amphetamine’s architecture is quite different, we took a look at one of the possible architectures that would allow adding more plugins as you think of the new cases and keep code testable.

As always, feedback is very welcome! You can find me on twitter @zats